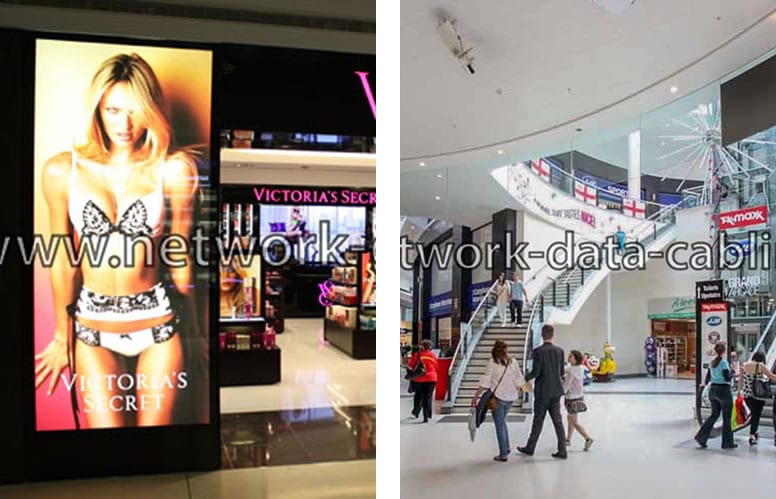 Whether you’re remodelling, rebuilding, or just adding POS stations in your established retail space, you’re going to need to have some cabling done. In a retail space, there are four main types of cabling that you’ll most likely be dealing with. These are voice and data lines, security and access control, video surveillance and fire alarm cabling. Each of these types uses different types of cables, although some of the newer closed-circuit video systems can use Category 5 data cabling.

There used to be a time when you would need two different types of cable for phones and POS terminals, but with the advent and popularity of digital phone systems, this isn’t the case any more. You will need either Category 5 or 6 cable for your voice and data requirements. Which one will depend on the length of the cable runs and at what speed your data network runs. The longer runs and higher data speeds require at least Category 6 (Cat6). If your retail establishment is in an area where there’s large amount of interference, you may want to look into Category 7 cable, which adds dual layers of shielding to prevent crosstalk and interference.

This type of cabling is governed by specifications issued by the Electronics Industry Association and Telecommunications Industry Association (EIA/TIA) in the 568/569 Standard. The 568 Standard is s broken down into A and B standards and determines in what order the cables are terminated on the terminal blocks, while the 569 Standard governs testing and certification standards, setting limits for Near and Far End Crosstalk ( NEXT & FEXT), which is a measurement of how much of the signal from each cable can be “heard” on the other cables. For example, the 568B Standard (the most commonly used) is terminated in the following order: White-blue, blue, white-orange, orange, white-green, green, white-brown, brown. People familiar with the old Bell Standard will recognize the white-(primary colour) wire as the tip and the primary colour as the ring of each pair. Most of your voice and data cables will be terminated (punched down) on 110 blocks in the data centre area and 110 outlets at the POS station.

Security and access control covers a wide range, but most people consider it as just “the burglar alarm.” They are so much more, though. You have single pair wiring that goes to doors that tells the system when those doors are open or closed. You might have cabling that runs to detectors in the ceiling that “listen” for the sound of breaking glass, or sensors by the door that detect the radio frequency signal from loss prevention tags. Larger stores may have some sort of electronic locking system on the office and/or back doors. Most systems are going to have a keypad control panel in the front, and maybe one in the office to turn arm and disarm the system using anywhere from four to eight conductors. Each POS station should have a two-wire panic switch. These cables are usually connected to the devices by screw terminals on the devices being controlled. Most of these will also require a monitoring resistor so that the control panel knows that the wires are connected and there are no breaks in the wires.

Cameras need two wires for power and ground and a wire pair to send the video signal on. Usually, this will be accomplished by running an 18-gauge single pair wire for power and an RG-58 coaxial cable for the video signal. However, many newer systems are being installed with hybrid cables. These cables combine both the power and video requirements into a single cable. Normally, these are nothing more than a single pair cable melded to an RG-58 coaxial cable. Power leads are terminated on both ends normally on screw terminals, while the coaxial cables are terminated on both ends with BNC connectors. However, newer systems are using Category 5 and 6 cables with RJ-45 8-Pin 8-Conductor plugs (ice cubes), just like Ethernet jumper cables.

By utilising technological enhancements and understanding trending data businesses within the retail sector we are prospering. Wayne Connors, ACCL’s Managing Director is often called upon to speak at retail based events.

The best IT systems in the world are only as good as the support and maintenance packages that supplement them. This is where ACCL outstrip the competition. If a problem occurs, engineers are on the ground within a few hours.

VMS – what is a VMS?   When considering a CCTV system there are many considerations that yo...

Since the start of the pandemic, the interest in thermal cameras has increased exponentially around ...

Installing CCTV the right way   Today, CCTV systems are common in most areas of our lives.  ... READ MORE FROM OUR BLOG