The exact year when we started seriously referring to London as “the CCTV capital of the world” is now a matter of historical debate. Some of us used it as early as 1996, when we crossed the 1,000-camera threshold. But that was more than 20 years ago. How many CCTV cameras are there in London today?

However, we can estimate the number of cameras in London.

Join us in our quest to figure it out — and in a discussion about what all of this tells us!

A History of Guesstimates

Remarkably enough for such a tightly-regulated field, we don’t have an exact figure for the number of CCTV cameras in London.  The best we can work with is numbers about government expenses related to CCTV funding.

These numbers have been high early on. In the first five years of government-sponsored efforts, more than GBP 150 million were spent on CCTV deployment throughout the UK.

The earliest efforts to study the results of this frantic investment were spearheaded by the Urbaneye project. The results of their European-wide investigation has shaped the way the security industry understands CCTV and crime today.

Throughout this period, Urbaneye’s original report remained the golden standard. Based on a survey of VAT-registered businesses in Putney, the report concluded that “it would not be unreasonable to ‘guesstimate’ that Londoners are monitored by at least 500,000 CCTV cameras”, or one camera for every 14 Londoners.

This figure has remained the reference figure for estimates even today.

It is only recently that the British Security Industry Association (BSIA) attempted to come up with new estimates, based on improved methodology. The BSIA published its results in a report entitled The Picture is Not Clear which, true to its name, puts forward a number of 4 to 5.9 million CCTV cameras in the UK.

BSIA’s study would account for roughly one camera for every 11-15 people, but the study covers the entire UK, not just London. Given London’s urban density, one would expect to find a figure closer to the high end of the spectrum – but the city’s rapid expansion also means that suburban areas might still dilute this figure. 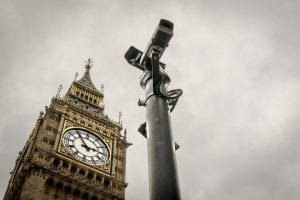 How Many CCTV Cameras Does London Have in 2019?

Clearly, the rise in private deployments makes any attempt to get a straight figure futile. But we can do our best to come up with an estimate for the number of CCTV cameras in London.

Reports between early 00s and 2019 put forward somewhat similar numbers: between 11 and 15 people per CCTV camera.

How Are London’s CCTV Cameras Distributed?

Unfortunately, this is even harder to figure out. Country- or city-wide estimates are reached by extrapolating from a small set of measurements. It works because deviations cancel each other out — but that doesn’t hold for smaller areas.

We can (sort of) work with official figures to get a qualitative analysis. Hackney and Wandsworth appear to be the most closely-watched boroughs of London. But the mechanisms behind the distribution are almost inscrutable; Lambeth has the lowest camera count, despite being literally across the street from Wandsworth.

These numbers are based on information that is publicly available and related to CCTV cameras whose installation has to be disclosed to (or often by) public and local authorities. They account for between one and two orders of magnitude fewer cameras per person than you would expect to find. This suggests that the vast majority of CCTV cameras in London are privately-deployed — not surprising, but worth putting in perspective.

Indeed, the Surveillance Camera Commissioner Annual Report for 2017 estimates that 90% of the CCTV cameras in the UK are “owned and operated by businesses, quasi government organisations, public sector organisations, voluntary sector and private households”. Some organisations, such as the Police Foundation, cite a figure at 98% in one of their briefings. 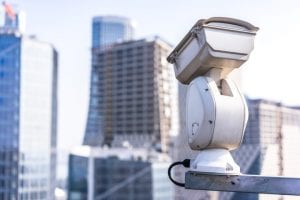 What Does the Future Hold?

If we look at the public sector, and don’t go farther than Camden, it would appear that the golden age of CCTV growth has passed. Between government policy and the supporting local administration, there are few public areas in London that legitimately need CCTV surveillance and are not already under surveillance.

What we still see, and expect to continue to see, is continued growth in the private sector, and increased adoption of advanced features, such as Automatic Number Plate Recognition (ANPR) and facial recognition. The UK police are “world leaders in the use of [ANPR] technology”, according to a study cited by the Police Foundation.

If the original growth models hold, population growth projections would suggest we can expect to see an additional 6,000 – 10,000 CCTV cameras every year for at least another 7 or 8 years.

What Does this Tell Us?

Even without precise figures, we could see the sharp increase in CCTV cameras deployments all around us. Any way of describing it seems to fall short in terms of style. In less than twenty-five years, we went from “definitely more than 1,000” to “maybe up to a million” CCTV cameras in London. Conservatively, we have 500 times more CCTV cameras than we had almost twenty years ago.

These cameras aren’t free, they cost more than just money, and not all of their cost is paid upfront. CCTV cameras need to be purchased and installed, but they incur maintenance and electricity bill costs throughout their lifetime. And the legal formalities are not always trivial. 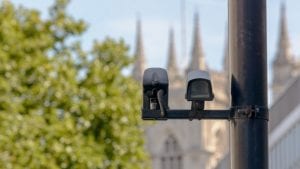 What Causes This Growth?

The rapid growth of CCTV camera deployment in London is testament not only to the growing security concerns, but also to the efficiency of CCTV cameras, or at the very least to their price-performance ratio.

Indeed, existing evidence paints a fairly diverse picture of CCTV efficiency. The evidence for efficiency is there, but it’s also clear that it’s affected by a great deal of factors, and CCTV effectiveness is not the same everywhere and in every scenario.

For example, studies have shown that CCTV installation resulted in significant decrease of crime rate, but only in some spaces. For instance, their deployment resulted in a “51% decrease in crimes committed in parking lots […] [and] a 23% decrease in crime on public transportation”, but yielded negligible results in other public spaces.

In order for CCTV cameras to be efficient in crime prevention and investigation, they need to be:

– Placed in a manner that makes them visible to potential offenders, but out of reach for determined offenders who might destroy them

– Correctly chosen and installed, so that they can provide clear pictures that investigators can work with.

The last two points have proven particularly stingy. The urban landscape of London is remarkably diverse, so all we have are best practices for installation, rather than a few well-understood “recipes”. Cameras mounted around corners, in bad ambient lighting conditions or with insufficient resolution have frustrated countless investigations over the years.

Don’t waste money on poorly installed CCTV systems for your London business. Talk to our CCTV experts and get your FREE, no-obligations on-site survey to find out how to get the most of your investment.

CCTVs owe their success not only to their accessibility and reliability, but also to their flexibility. Many CCTV cameras in London use advanced features, such as ANPR, which enable them to be used for more than general surveillance.

Concerns about privacy or unnecessary spending have also been raised in all this time, especially with regard to surveillance in public spaces. These concerns are certainly not unfounded. During the last 8-10 years, public authorities have recognized this problem, and there have been some attempts to prevent unnecessary CCTV deployment. However, many privacy rights advocates consider these efforts to be insufficient, and warn against increasing public surveillance.

The current consensus of the security industry (and public authorities) leans towards responsible deployment, by encouraging private enterprises and public authorities to deploy CCTVs only where there is a legitimate need that cannot be fulfilled through other, less intrusive measures.

As an example, the surveillance camera commissioner cites a case where a review of the local authorities, followed by the removal of ineffective cameras, saved GBP 250,000. Some local councils are reducing their surveillance budgets considerably and looking into alternative solutions, too.

We expect this number to grow, and we expect to see greater specialization in this field, as CCTV cameras with facial recognition or other smart image processing features will see broader adoption.

As you may expect, the highest density o CCTV cameras in London is in the city’s busiest areas. Shopping malls, other commercial centres, parking lots and government institutions typically have  CCTV systems with various features installed.

At ACCL, we’ve been installing CCTV systems in London and the surrounding areas for more than 20 years. We can say that we are responsible for quite a part of the numbers mentioned above. All the CCTV systems that we have installed are law-, regulations- and standard-compliant. Even more, they offer our clients the ROI and the safety they need. Check out our CCTV installation services in London and our clients’ testimonials.

Let’s talk about the best way to ensure the safety of your company! 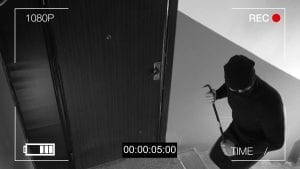 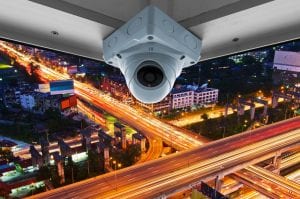 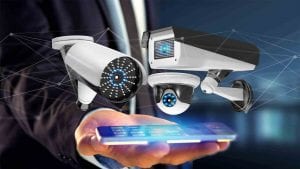 What Types of CCTV Cameras Are There?