The shift towards intelligent, autonomous devices, and the high network speeds available at an increasingly lower prices have led to a slow, but steady convergence of traditionally separate network functions. Voice and security systems were the first ones to make the transition.

But as smart devices — the components of the smart buildings – become increasingly capable, many other systems, from lighting and energy metering to HVAC and elevators, are making the transition to a consolidated structure, where they share the same data network.

This makes the data network critical to exploiting a smart building ecosystem In London – or rather, as we will see, makes the data network the very fabric of a smart building intelligence. Adopting this radically different perspective and implementing it in a durable manner is a challenge to facility and IT managers, engineers and technicians alike. Today, we would like to discuss the main aspects of this paradigm, and offer some practical tips for its implementation.

What constitutes a smart building? Siemens, one of the leading vendors of smart building solutions, describes smart buildings as starting with “an infrastructure […]  based on a robust, open operating system that supports a well-connected and integrated network of building systems and controls”.

Traditionally, facilities such as security, HVAC and lighting systems were separate and largely independent from each other. Smart buildings are what you get when you bring them together: in other words, it’s cross-system integration that puts the “smart” in “smart buildings”.

What’s the role of smart devices? Smart devices, by themselves, are little more than expensive, network-aware versions of their “dumb” counterparts.

It’s their permanent communication that provides value. In order for that to happen, smart devices are not just actionable elements, but also data sources: a smart switch, for example, can not only switch a lighting unit on and off, but also provide state querying, usage statistics, and sometimes even energy readings over the network.

When we speak of “integration”, we are referring to two types, or two levels of integration:

What systems do smart buildings integrate? The main candidates are the communications, security, monitoring, access, lighting, elevators and HVAC systems. Energy metering, and fire and other emergency services are also integrated to a high degree, but due to legal and security reasons their functionality tends to be less dependent on data communication.

Why are these systems integrated? Integration is both a technical objective and an opportunity in itself. As we will see shortly, large-scale integration has its own benefits in term of cost, both upfront and in the long run. But integration is what enables these separate systems to collaborate and form a larger, more intelligent system, capable of useful decisions. This is what grants smart buildings an increased operational efficiency, lower costs, and greater flexibility for your business. 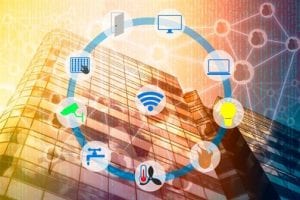 So far, this looks rather intimidating. Some of those systems are complex enough on their own that they almost belong to separate branches of engineering. Where does one even begin to think of integrating them?

Requirements drive integration decisions. The modern IoT industry may not give that impression, but integrated access control and lighting systems, for example, did not arise because two young geeks woke up one day and thought “well, I wonder what happens if we put these two together”.

What happened, in fact, was that facility managers wanted an automated solution to the problem of lights being left on after business hours, or in infrequently-accessed areas such as basements.

This is a trivial example, but it illustrates a wider point: integration decisions should be driven by legitimate business requirements. Typical examples of such requirements include:

The exercise of narrowing down these requirements is useful regardless of what side of the facility divide you are. If you are a tenant, knowing what to integrate will help you prioritize deployment and installation activities. If you are a facilities owner or manager, knowing your customer’s requirements will help you prioritize infrastructure development and plan servicing and maintenance.

Large-scale infrastructure integration is the foundation of application-level integration. However, it has both short-term and long-term advantages of its own, which are worth discussing separately.

Wired networks are the main mechanism of large-scale infrastructure integration. Smart devices use a variety of communication protocols, both wired and wireless, but the vast majority of inter-system traffic is carried out through the wired data network of a building.

Consequently, most of the infrastructure-level integration is carried out in terms of cabling, which is the fabric of a network’s infrastructure.

Media type consolidation is the most common and accessible opportunity that infrastructure integration affords. Today, most sections of a typical company network need only two or three types of cabling: copper Cat6 or Cat6e cabling for office networks and short-range data network integration, and fibre cabling – such as OS1, OS2, OM2 or OM3, for high-bandwidth and/or long-range (over 100 meters) applications, such as security cameras. Many company networks can be built almost exclusively over Cat6/Cat6e cabling, with high-speed fiber links reserved for data centres and core network sections.

Other cable types that used to be common until not so long ago include coaxial cables (mainly for CCTV systems) and Cat3 cables (primarily for voice communication equipment). However, the industry is shifting away from these, not so much for performance reasons (coaxial cable, for example, is still sufficient for basic CCTV use) but for practical reasons.

Structured cabling solutions are the other widespread aspect of infrastructure-level integration. Structured cabling is a cabling design methodology that uses a uniform set of elementary building blocks for each section of a network. The design of every section – from the work area to the equipment room – is made according to an industry-accepted set of guidelines, which leads to a uniform and flexible cabling infrastructure.

The primary benefits of a structured cabling system are:

Managing diversity is the primary challenge of infrastructure-level integration. Voice and security devices have been quick to make the transition to IP networks, and many of them can be plugged right into a network switch, or can connect over Wi-Fi.

However, other protocols are still in use, and with good reasons. ZigBee and Bluetooth, for example, have very low power requirements, making them ideal for battery-powered devices. HVAC systems often use protocols such as BACnet and Modbus, for both compatibility and technical reasons.

Integrating these devices into the company network will require application-specific gateway equipment and software, sometimes universal, sometimes vendor-supplied. You should consider your options before committing to an investment; the reliability of the data connection will depend not only on the cabling infrastructure, but also on the quality of the gateway equipment. 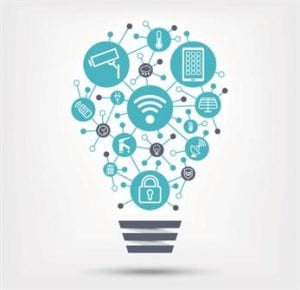 The range of choices you have for application-level integration depends primarily of the devices that you use. More precisely, it depends on:

Open standards and ecosystems are what give you the best long-term guarantees in this regard. Protocols standardized by vendor alliances, such as ZigBee, Bluetooth or Ethernet, offer you a wealth of choices in terms of devices, easy replacement of EOL-ed devices whose vendors have gone out of business, and continuous improvement and support.

Data is where the potential for value resides. Smart systems use short-term data to make decisions and aggregate long-term data to perform analytics and derive improvement. This means that optimizing data traffic is paramount to smart building integration. The optimization requirements for short-term and long-term data are largely complementary:

Short-term data, mainly from sensors and security devices, is often latency-constrained. You can live with a level of latency about an order of magnitude over that required for voice traffic; however, a physical infrastructure that can guarantee a good latency is still required, as several devices, sometimes from separate sections of the network, may be involved in some actions.

Long-term data used for analytics is, by necessity, bandwidth-dependent. Fortunately, it is gathered from the “leafs” of the network — devices at its very edge — so the large volume is evenly spread throughout the network and only consolidated in core sections. Provisioning for long-term edge-to-core scalability, through a solid scaling strategy and structured cabling deployment is the best way to guarantee long-term viability of your smart building analytics system.

Smart buildings offer an unprecedented chance to make business activities more cost-efficient and more environment-friendly. However, smart building systems require integration in order to be leveraged efficiently. Integration is carried out both at physical level (cabling and wireless network connection) and at application level.

The cabling industry has developed a number of design practices and strategies to make this integration work in the long run. At ACCL, we have spent more than 25 years working on cabling projects for smart and regular buildings in London and the surrounding areas. Get in touch with us and schedule your FREE, no-obligations on-site survey.