Point-to-Multipoint Wireless: Is It What I Need?

Many companies in busy urban areas of the UK, such as London, hit an uncanny barrier in the development of their network infrastructure as soon as they need to expand past the confines of a single office or a small campus. Deploying buried cables, even when economically feasible, is hampered by legal and administrative difficulties.

With mounting development cost, it’s becoming increasingly difficult for ISPs to meet their customers halfway with their leased lines portfolio. Alternative outdoors/wide-area wireless options, such as point-to-multipoint wireless links, are an increasingly common option under these circumstances. 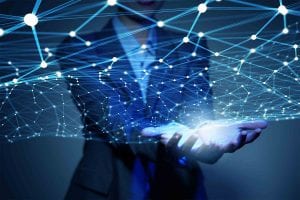 Point-to-multipoint wireless technology is remarkably scalable and very reliable. It is used in scenarios that range from providing connectivity to IP security cameras deployed over a wide surface to providing a reliable, carrier-grade connection between multiple offices of the same company. In general, point-to-multipoint wireless connectivity is one of the options you should consider in scenarios such as:

Point-to-multipoint wireless connectivity is only one of the options you have in these cases. ACCL can help you choose the one that suits your company’s needs best. Check out our full range of wireless solutions.

What is Point-to-Multipoint Wireless?

Devices in the former class are usually dedicated to serving as communication nodes and are called base stations. The latter are usually called “endpoints” or “subscriber units”.

They are connected to (or embedded in) local data networks, devices such CCTV cameras, data logging units or other types of security devices, and are the source of network traffic. These devices do not communicate directly with each other, but via the base station, which can relay data between them. 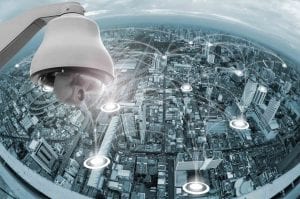 In larger deployments, the base station will have a dedicated (often point-to-point) link to a core network, which relays data over much longer distance — tens or hundreds of kilometers. This scenario is called “backhauling”.

PTMP describes a network *topology* — i.e. how devices are connected — not a protocol. PTMP networks can operate using various protocols, such as LTE (licensed or unlicensed) or MPLS, which can carry regular IP data.

In other words, Ethernet or fiber networks can be freely interconnected using PTMP wireless links. The interconnect is transparent to the network devices.

There are three frequency ranges that are typical for point-to-multipoint wireless links:

Microwave-region PTMP links are the most common. They strike a good balance between spectrum availability and cost, and equipment in this class is reliable and reasonably easy to install and maintain.

What Can Point-to-Multipoint Wireless Technology Offer Me?

Speed and latency. Point-to-multipoint wireless base stations have aggregated speeds that can go up to 10 Gbps. “Aggregated” means that the speed is actually divided among several of the subscriber units — in other words, all subscriber units get to share these 10 Gbps, rather than having a 10 Gbps channel each.

High-bandwidth, high-distance links are costly and require a special license to operate, though, so most commercial deployments target operate at lower speeds (typically in the 1 Gbps range). This is, nonetheless, sufficient to support multi-endpoint streaming operation or compete with a leased line in terms of bandwidth.

The latency figures of point-to-multipoint wireless links are worse than the latency figures of wired links. Exact figures are hard to give, as latency depends not only on link technology, but also on network topology, on the number of endpoints in the network, and on communication protocols. Broadly speaking, though, point-to-multipoint wireless links are sufficient for all but the most latency-demanding real-time workloads.

Range. Most PTMP deployments cover areas with a radius of up to 2-4 km. This limit is dictated more by demand than by the capability of the technology itself.

Higher-power equipment, operating in licensed areas of the EM spectrum, can reach much longer distances. However, a PTMP topology primarily enables connectivity in terms of *area*, not distance.

When long distances (tens or hundreds of kilometers) are involved, endpoints are usually clustered within smaller areas. In such cases, it is usually more feasible to network each cluster of devices using wired or PTMP links, and interconnect the clusters using point-to-point links.

What Applications Is PTMP Best Suited for?

Point-to-multipoint wireless connectivity is the right solution for interconnecting a small- to medium-sized (3-4 up to 50-60) number of endpoints. Most deployments cover areas where the distance between the base station and subscriber units is on the order of 2-5 km, which is typical for urban areas, but both shorter and longer ranges are feasible.

What Are Some of the Scenarios Where PTMP Links Are Used?

Leased line alternative. When used with relatively few subscriber endpoints, PTMP networks can match the speed of most leased line offerings, often with better latency. Especially in busy urban areas, the long-term cost of PTMP links is better than that of a leased line, but the upfront costs are higher, and the equipment is yours to maintain.

Wide-area video surveillance. A PTMP wireless network is a very good fit for CCTV and security systems that cover wide areas, especially in remote locations. The bandwidth and latency of such a network are good enough for CCTV video streaming, so there is no compromise in terms of performance.

However, the security impact of wireless deployment needs to be assessed; for example, an attacker with minimal perimeter access possibilities would find it easier to disrupt wireless communication at the edge of the surveilled area.

Application-specific communication infrastructure. If you need a dedicated communication link, PTMP wireless networks are a more capable alternative to more basic solutions such as Personal Mobile Radio (PMR). It is certainly more costly to operate, but it is more flexible and more capable, enabling you to go beyond voice-only communication.

Backup links and disaster recovery. PTMP wireless networks are a good choice for implementing backup links, either to cover critical business processes during unscheduled downtimes of a leased lines, or in order to provide a reliable communication link in case of disaster. However, special installation precautions may be required in these cases.

What Kind of Equipment Does a PTMP Wireless Network Need?

At a minimum, you are going to need to install a base station and at least one antenna. Most base stations today operate more than one antenna though — typically, at least two or three — in order to provide better coverage and higher performance.

Using more antennas enables a better channeling of power in each direction, and more antennae can be used to transmit and receive data at the same time, from multiple devices (a mode of operation known as MIMO — Multiple Input, Multiple Output).

The antennae are usually grouped in a single array, for easier installation, and the array is usually installed on a rooftop or a pole. The base station, or at least its RF unit, is mounted in close proximity to the antenna array for technical reasons.

Some subscriber units have an integrated radio module, which they can use to connect directly to the PTMP networks. More often than not, though, several endpoint devices will connect, via a wired or a short-range wireless link, to a separate radio module, with one or more antennae.

The base station and the radio modules deployed in the field need their own power sources. Nodes that need relatively infrequent communication can be battery-powered, but the base station needs a good mains (sometimes three-phase) connection.

When using the PTMP network as a leased-line replacement, you will also need a way to connect each office network to the multipoint wireless network. Technically, this would be done via a modem, but since this is a frequent deployment scenario, many equipment manufacturers offer PTMP base stations with integrated modems, that you can easily integrate into your network. 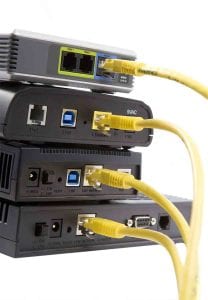 The performance of point-to-multipoint wireless networks is sufficient for virtually every circumstance where short-, medium- or long-distance deployment is needed. However, it is still below the performance that you can get from a wired network, at a higher upfront cost, and more often than not at higher long-term cost as well.

Depending on the number of endpoints that you need to connect, on their type and capabilities, PTMP links may be a better option than connectivity via VPN or leased lines, especially in busy urban areas like London, where leased lines are expensive.

However, before committing to the significant investment that a long-distance wireless network entails, you should carefully analyse your requirements and your equipment’s capabilities.

Point-to-multipoint wireless networks are an increasingly common option for businesses who need to provide reliable, high-speed connectivity to multiple endpoints scattered over a wide area.

Although reliable and cost-efficient in the long run, point-to-multipoint wireless networks tend to have high upfront costs, and require significant expertise for installation and configuration.

Not sure if a point-to-multipoint wireless solution is the right call for your business? We are here to help! Before making such a big investment, let our experts make sure that you will use it to the fullest. Get in touch with us and let’s schedule your FREE, no-obligations on-site survey! Our team will prepare a detailed report including our findings and recommendations so you can make an informed decision.

Everything You Need to Know about Point-to-Point Wireless Links