Your guide to Wi-Fi in the office

Wi-Fi has become one of those things that we take for granted. We don’t notice it when it works, but when it works poorly (or not at all), we definitely notice.

Slow or failure-prone Wi-Fi connections are frustrating. When the office Wi-Fi doesn’t work, meetings and decisions get postponed, and customers become unhappy. When the school Wi-Fi is shabby, precious minutes – of which we barely seem to have enough in class – are wasted.

Since the Wi-Fi network is so important for everyday activity, choosing and deploying the best devices – routers, access points, range extenders – can feel overwhelming. The field is riddled with tech jargon and marketing terms, and it seems like you can’t get a straightforward answer about anything.

It doesn’t help that sometimes there really is no simple answer. But straightforward? We think we’ve got that covered! Without further ado, here is our list of most frequent questions about having a Wi-Fi installation – and our most straightforward answers!

Wi-Fi is the name of a wireless networking technology which allows various devices – laptops, tablets, phones, security cameras or various other gadgets – to communicate without using cables. A Wi-Fi network is just like an Ethernet network, but cable-free.

There are several standards in the Wi-Fi family, and not all of them are compatible with each other.

There are no data cables between devices and the Wi-Fi access point, but Wi-Fi routers and access points still need to be connected to the rest of your network, or at the very least to your ISP. This is done via a wired connection. All these devices need to be powered up, too, so they do need power cables.

However, some, if not all of these cables can be deployed through ceilings or underneath floors. Structured cabling standards make provisions for the use of Wi-Fi access points and routers, so they are easy to integrate in your organisation’s network.

In raw numbers: depending on the particular standard you use – such as 802.11n or 802.11ac – the maximum aggregated throughput of a Wi-Fi router ranges between 11 Mbps and 3.46 Gbps. In other words, it can handle up to 3.46 Gbps of traffic going through the router, but this is only a theoretical limit. In practice, peak performance is lower.

In practical terms, a well-designed Wi-Fi network can match the performance of a wired network for typical office tasks, general browsing or entertainment.

Unless you need to support legacy devices, and you cannot bridge them to your network in any other way, you want to use 802.11ac or 802.11n.

A router is a device which can connect several devices to a network, and move traffic between that network and the Internet (or another network). A Wi-Fi router is simply a router that also has Wi-Fi capabilities: devices can connect to it via Wi-Fi, or using Ethernet cables.

A Wi-Fi Access Point (AP) – sometimes called a hotspot – is somewhat like a router, in that it allows you to connect several devices to a network. Wi-Fi APs only accept wireless connections, but that’s not the most important difference.

In contrast with routers, several Wi-Fi access points can be used to service the same network. This way, the range and capacity of a network is not limited to the range of a single AP.

A Wi-Fi AP is an autonomous device. It broadcasts its own radio signal and handles its own clients.

In contrast, a range extender (sometimes called a booster or a repeater) simply boosts the signal coming from access points and devices, so that they can communicate over longer ranges.

There is no theoretical limit for the range of a network. Wi-Fi networks that span an entire 40-story office building, or an entire sports complex, are not unheard of.

The range of a single router or access point depends on the 802.11 standard you use. Ballpark figures range between 60-200 ft. indoors and 300-800 ft. outdoors. This range can be extended using access points and/or repeaters, up to any distance, as long as APs can still be plugged into a router. In practice, Wi-Fi networks are, at most, campus-wide. For longer distances, you typically bridge local network together through other means, such as VPN, leased lines, or free to air connections.

There is no practical limit to how many devices you can connect to a Wi-Fi network. However, a single AP cannot support any number of devices. In practice, most APs can handle up to 80-100 devices without significant performance loss. If you need to handle more than 80-100 devices at a time in a given area, you will need several access points.

A mesh network (the technical term is Wireless Mesh Network or WMN) is a wireless network in which access points can communicate not only with a central router through a wired connection, but also with each other, through wireless links.

Mesh networks can offer better resilience and coverage than traditional Wi-Fi systems, but they tend to be more expensive and are not as popular.

At a minimum, you need a Wi-Fi router, or a wireless access point and an Ethernet router. This is sufficient for a small office, with no more than one or two rooms, and up to 20-30 devices.

For larger offices, you need to account not only for the additional devices, but also for device range and signal degradation. The only way to get a definitive answer is through a site survey.

A Wi-Fi (or radio) site survey is a procedure through which one can build a radio profile of your premises. This profile tells you how radio signals propagate throughout your premises. In turn, this information can be used to decide where you need to place access points in order to ensure 100% coverage and maximum performance.

A site survey is necessary because the propagation of radio signals is very difficult to predict. While computer simulations can be used to get a rough initial idea of the RF profile, the only way to ensure proper coverage is to take measurements.

Access to Wi-Fi networks can be secured using the WPA2 protocol. WPA2 comes in two versions – Personal and Enterprise If you work with sensitive data, WPA2 Enterprise is the best option. Most Wi-Fi access points today support this protocol.

However, securing access using WPA2 is only one component of a sound security strategy. You should not rely only on wireless access restrictions for your network’s security.

Furthermore, it’s important to understand that the security of this scheme depends on the WPA2 implementation on both the client and the AP or router. Updating your Wi-Fi devices is critical to ensuring your network’s security.

Yes. Wi-Fi protocols are designed to allow several networks to coexist to some degree.

A Wi-Fi guest network is a network section that enables only limited access to an organisation’s network. For example, a company may use it to allow visitors and customers to connect to the Internet, but not access computers in the company network.

Some Wi-Fi routers and access points have native support for this feature. Where it is not available, it can be emulated by using separate access points for a separate Wi-Fi network.

Poor signal quality means that every once in a while a packet of data is corrupted and has to be retransmitted. This increases latency, and reduces the effective bandwidth, since the same data has to be transmitted twice (or more).

There are many factors that influence Wi-Fi signal quality. The most important are:

Wi-Fi devices operate in the 2.4 GHz or 5 GHz frequency range, depending on the 802.11 standard in use and configuration. However, Wi-Fi devices are not the only devices which operate in these regions of the radio spectrum. Other protocols, such as Bluetooth, can operate in the 2.4 GHz region as well, and other devices may unintentionally leak signals in these regions of the spectrum. Several Wi-Fi network can cover the same area, but not under any conditions, and not in any number.

Sometimes these signals can be so strong that they overcome the signal from the devices in your network. This effect can be intermittent, too, so you may not notice it all the time.

The effects of interference can be mitigated to some degree through adequate configuration or by using additional access points, but the only real solution is to eliminate the source of the interference.

Ideally, you want to place your router or access point in a high point, such as on the ceiling or on top of a tall bookshelf. It should be placed away from large metallic objects and as close as possible to the centre of the area it’s intended to service.

That depends. Modern routers support a technology called MIMO (Multiple Input, Multiple Output), which enables it to use several radio signals at a time to communicate with one (or more) devices.

Furthermore, some Wi-Fi routers use more than one radio module, so that they can work in both the 2.4 GHz and 5 GHz region of the spectrum, effectively managing two wireless networks at a time.

In either of these cases, a router with more antennas can be faster. A client device that also supports MIMO can have a higher throughput, or the AP can service more devices at the same time.

Some wireless APs can be managed through a cloud-based system. These systems aggregate status and performance information from any number of access points, allow you to configure and synchronise an organisation’s APs, and can give detailed usage reports.

If you have a large network, with more than 4-5 APs and tens or hundreds of users and devices, a cloud management system can be very useful.

Got more questions? We’d be happy to answer them! Give us a call or drop us a line any time. 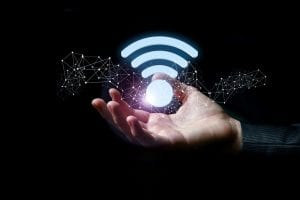 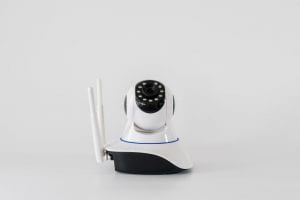 Wireless CCTV- Which options are available for home, business and Industrial customers? 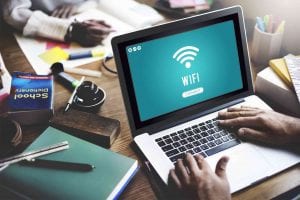