WiFi black spots are part of everyday reality in many homes and offices in London. Every office has that dreadful meeting room where you just can’t pick up the WiFi signal.

Eventually, someone installs an extra WiFi access point and the problem sort of goes away – although, more often than not, just resurfaces elsewhere, or worse, you can now see the WiFi network, but it’s slow and the connection keeps dropping. 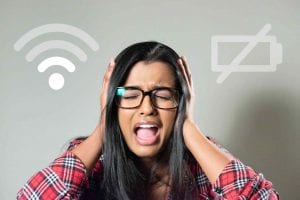 Sounds familiar, right? Everyday experience might make it seem otherwise, but there is actually some logic behind that capricious WiFi signal indicator. It’s science, not gremlins – albeit the seemingly strange behaviour of radio signals has rightfully earned RF engineering the reputation of being a black art of sorts.

It’s really not, though. In this article, we’ll investigate some of the science behind WiFi dead spots – and, more importantly, talk about how to prevent them, and how to deal with them.

What are WiFi Black Spots?

WiFi black spots or WiFi dead spots are areas where the WiFi signal is too weak, or too unstable, to maintain WiFi connectivity. They’re small areas (rooms, or regions of a room, sometimes as small as a single desk) that should be covered by a nearby access point, but for some uncanny reason just aren’t.

Although we call them “black spots” and associate them with a specific location, they aren’t necessarily permanent. In many cases, WiFi connectivity seems to be fine half the time, then suddenly stops working for a few hours. 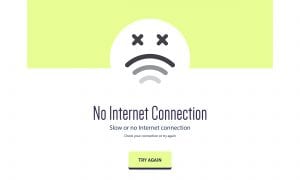 WiFi black spots can be caused by three things: interference, physical obstruction, and distance, sometimes separately, sometimes at the same time, with one factor aggravating the other.

Interference is, quite simply, a disturbance caused by other devices which emit radio signals in the same frequency band used by your WiFi network. This causes the WiFi signal to be “lost” amid all the “noise”. WiFi black spots occur in areas where interference is sever enough that a phone, or laptop, simply can’t “keep talking” to the WiFi access point well enough to maintain connection – or, indeed, even to connect.

It’s exactly the same mechanism that makes it hard to talk to somebody in a noisy pub: even if they’re speaking clearly and you are close enough to each other, sometimes there’s just too much noise for you to understand what they’re saying.

Physical obstruction is a little less obvious because of how EM waves behave, but the name gives it away: some areas may simply not be covered by a WiFi access point. WiFi black spots occur in areas where the signal simply isn’t strong enough to be picked up, even in the absence of interference. 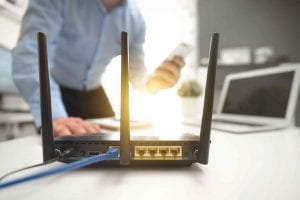 This isn’t necessarily related to distance albeit, indeed, WiFi access points can only cover a limited range. To get an intuitive grasp of this phenomenon, imagine a bright lamp shining inside an otherwise dark room.

Normally, this will cause the walls of the room to be (almost) uniformly illuminated. But if you place an obstacle – say, a piece of cardboard – in front of the light, some area of the wall won’t be as strongly illuminated. The shadow of the obstacle is simply the region where the light can’t make it through.

Depending on the size of the obstacle and the distance from the source of light, it may not be pitch-black – some amount of light is reflected from nearby walls, for example – but it’s darker, nonetheless.

Radio waves from the AP behave in a somewhat similar manner, but they don’t interact with matter exactly the way the light does. Both are forms of electromagnetic radiation, but how of EM waves interact with various types of objects depends a lot on their frequency.

For example, light won’t pass through cardboard, but radio waves in the frequency bands used for WiFi networking (2.4 GHz, 5 GHz) will. Other objects, though, such as large, metallic cabinets, are effective obstacles for light and radio signals alike.

That being said, obstacles aren’t the only cause of physical obstruction. Incorrect installation or, quite simply, poor equipment quality, can also cause poor WiFi signal coverage. We’ll return to this in a minute – for now, just bear in mind that poor coverage is not necessarily caused by something getting in the way of a signal. 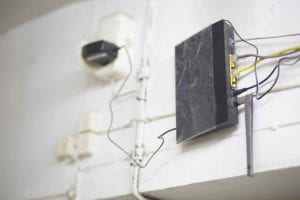 Distance is the most obvious factor. Sometimes – possibly, but not necessarily aggravated by interference or obstruction – distance is the boring, but real reason why an area isn’t covered.

The maximum distance that a WiFi access point can cover is affected by many factors, especially indoors – and sometimes, an area is a “dead spot” simply because it’s too far.

Interference generally comes from other electrical and electronic appliances, although not necessarily radio or networking appliances.

Sometimes, the interference is completely unintentional. Virtually all electronics devices we use emit some amount of EM radiation. They are (or should be) designed so as not to emit radiation that might interfere with other, nearby devices.

But some poor-quality devices, or some damaged high-quality devices, do emit enough radiation strong enough to interfere with other electronic devices. If some of the EM radiation they emit is in the same frequency band as the WiFi network, this can “drown” the networking signal in noise. Areas near sources of interference become WiFi dead spots.

This is why WiFi problems caused by interference seem to go away on their own sometimes: the source of the interference sometimes just stops. In a much publicized incident, an old TV caused broadband outages for more than a year before someone figured it out.

However, interference isn’t necessarily caused by bad devices: sometimes there’s just too many of them. 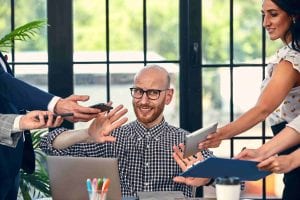 Interference from “bad” devices is a lot like auditory interference from a car engine: a loud enough engine can make it impossible to talk to somebody, even if they’re standing close to you. The car engine just emits noise – unlike the person in front of you, it’s not saying anything – but it’s nonetheless too loud to hear the people talking next to you.

But if you’re in a loud pub, everyone’s talking to each other in English. The conversation they carry out makes sense (more or less) – there’s just enough of it that it’s too loud.

A similar phenomenon can occur with EM waves, too. If too many WiFi devices cover a particular area, the signal from an individual device may simply be drowned by the signals from all other devices, to the point where the receiver is saturated and can’t make out any individual signal. That area then becomes a WiFi black spot.

This is further complicated by the fact that the same frequency band may be shared by devices using distinct technologies. For regulatory and historical reasons, both WiFi and Bluetooth operate in the 2.4 GHz frequency band, and may interfere with one another under some circumstances.

We’ve already covered the first and most obvious reason of poor coverage: physical obstacles. There are things, such as large metallic objects that WiFi signals simply can’t penetrate.

WiFi access points, phones, tablets and laptops, all use antennae in order to transmit and receive WiFi signals. However, antennae emit more strongly in some directions than in others, depending on their shape, size, and so on. Think, if you will, of the iconic Victorian street light: it emitted light all around, but it was slightly darker right at the base of the pole, where the light couldn’t reach. 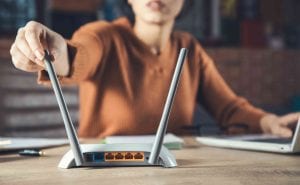 Consequently, depending on how access points, clients, and potential obstacles are positioned relative to each other, some areas may simply end up being out of the signal’s reach.

The presence of physical obstacles is sometimes hard to infer because RF signals don’t propagate just in straight lines, from the router’s antenna to the laptop’s antenna. They bounce against objects, just like light is reflected in a mirror, or “scatter” against some objects, just like a thick stream of tap water is “scattered” when you place a fork underneath it.

So the exact “route” they take, between a phone or a laptop and a WiFi access point, isn’t always obvious, and objects that don’t necessarily seem to “get in the way” turn out to be serious obstacles. Furthermore, reflected and scattered signals can become a source of interference, too.

How Can You Fix WiFi Black Spots?

As with any problems, you can fix WiFi black spots in two ways: you can alleviate the symptoms, or you can remove the source. In some cases, both approaches work, but some problems won’t go away unless you remove their source.

Interference can be mitigated in two ways: either you remove the source or, if possible, you avoid it. 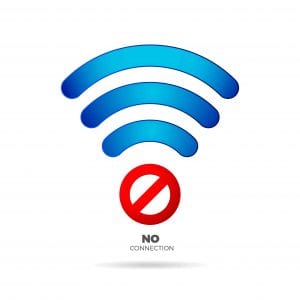 Physical obstruction and distance are somewhat easier to deal with:

How Can I Identify WiFi Black Spots, Obstacles, and Interference Sources?

As we’ve just seen, there is, indeed, some logic to the seemingly capricious behaviour of WiFi signals. However, that logic is sometimes completely inscrutable. So the very practical minds of RF and networking engineer have long ago come up with a very practical solution, called “wireless survey” or “radio survey”.

A wireless survey is exactly what it sounds like: using a measurement device called spectrum analyzer, a well-trained (and very patient) professional maps out the signal strength across all relevant frequency band, all over a certain area and, if needed, at various points in time. The data is then used to produce a sort of a “heat map” that can be used to study signal strength, and to identify potential obstacles and interference sources.

However, a wireless survey is not just a design tool, it’s also a useful troubleshooting tool. It can be used to identify existing dead spots and remedy their causes – whether it’s interference, obstacles, or just bad installation.

WiFi black spots – those seemingly haunted spots were WiFi just won’t work – are caused by poor WiFi signal. That is, the WiFi signal is simply too weak to be picked up – either by itself, because the signal source is obstructed or the source is too far, or relative to other signals in the same frequency band, because they are so loud that they “drown” it.

Removing sources of interference, adjusting the configuration of the network, or adjusting the physical disposition of its components or of various obstacles in the environment, can restore the signal strength and improve coverage. However, identifying the exact cause of interference or poor coverage is not always easy, and can require a great deal of trial-and-error.

Not sure what causes your WiFi dead spots? We can find out for you! Get in touch with our experienced engineers and technicians.

What Is a Wireless Bridge and Why Do You Need One? 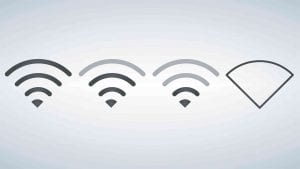 What Affects Wifi Speed: 17 Factors That Can Impact Your Connection Quality